Skip to content
Press Enter / Return to begin your search.

This Halloween, I carved a bee-themed jack-o-lantern. The shape, and size, of my pumpkin was perfect for a skep carving (and a couple bees of course). Humans have a long history with keeping bees; a skep is an artificial hive that beekeepers have been using for over 2,000 years.

In nature, European honey bees (the type that are most commonly kept in the U.S.) nest in cavities. Winnie the Pooh illustrators did not always get this right. When Pooh sticks his hand into a tree for some honey, they’ve got it right! This tree is called a “bee tree.” In this hollow tree, resident bees build wax comb, raise their young, and store their food (Pooh is only interested in the honey).

When Piglet gets himself stuck in a hive hanging from a tree, this is where things get biologically murky. While there are some honey bees that do nest in the open (such as Asian honey bees), they do not build nests like the one Piglet is stuck in. Asian honey bees build sheets of wax comb that hang vertically from a tree branch—there is no outside covering. The nest Piglet is stuck in looks more like a hornet’s nest. (This is unfortunate for Piglet: hornets are much more aggressive than honey bees.)

Since most honey bees nest in cavities, the first thing a beekeeper must do is provide their bees with an acceptable cavity. Modern-day beekeepers in the United States have many options (Langstroth, Top Bar, Warre to name a few). Each modern-day option is composed of wood and has some sort of removable part to aid in hive management and honey extraction (if you have a penchant for honey like our friend Pooh). Historically, this wasn’t the case. There are three main types of traditional artificial bee hives: mud/clay hives, bee gums (which I had never heard of before doing some research for this post), and skeps.

Bee hives made of mud and/or clay are still used in Egypt today. These tall, cylindrical hives are often made of a mixture of mud, straw, and even dung. In this 1924 watercolor by a Polish painter (and beekeeper?), these hives look like tree stumps. When you think about where bees naturally reside (bee trees!), this shape makes sense. 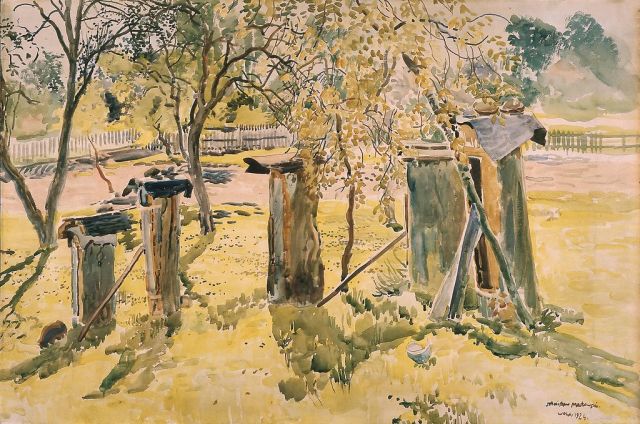 Bee gums were used by beekeepers in the eastern U.S. during the 20th century. This type of hive was literally a hollowed-out tree. This is probably the most natural artificial hive you can have. Despite the au-naturale feeling of this artificial hive, it is hard to inspect and even harder to extract honey (if that’s your plan) from this type of hive.

And finally, there is the skep. The skep is a woven basket with an open end that is placed over the bees. (Likely the inspiration for the beehive.) There is a single hole toward the bottom or the middle of the skep; this opening allows the bees to come and go. As they would in any cavity they make home, the bees furnish the skep with vertical wax comb. Some more modern skeps have smaller woven caps that can be removed to inspect the bees. Even with this addition, keeping bees in skeps is prohibited in most U.S. states. The reason: it’s just too hard to make sure your bees are disease-free when they’re kept in a skep. I guess that means mud/clay hives and bee gums might be illegal too?

If you’re interested in making a skep of your own, look no further than Beespoke. 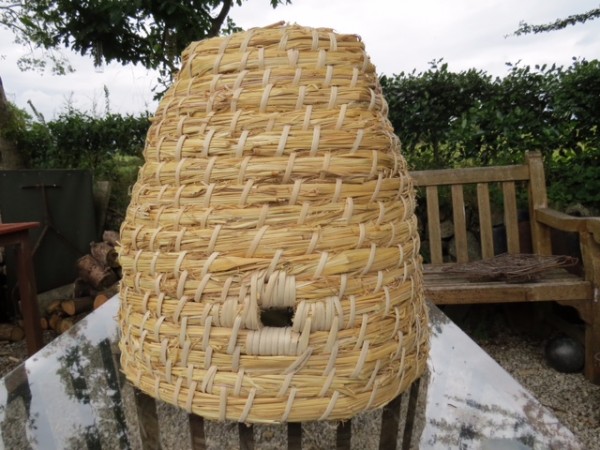 View all posts by Rachael Bonoan